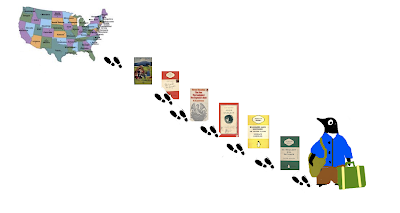 The Penguin and I will be heading to the United States on Thursday morning.  I am not looking forward to the long flights though I always cope with it okay.

The Kindle is loaded with some books. Some of the titles are Murder in Mississippi by John Saffran (Australian view on the trial of an African American man convicted of killing a well known white supremacist). I am already well into it.

I included some Mark Twain, Charles Dickens and Jane Austen in case I'm feeling I need some solid brain food too.

E-books are great for travel. All of those stories in one small packet.

Plans so far include visiting my sister just north of San Francisco. Hoping to go to the John Steinbeck Centre in Monterey CA and the Jack London State Park/Museum in Novato California.  Then onto Florida to stay with a friend for a week. We have written to each other for 25 years but not seen one another. We used to work in the same school all those years ago. We're going to do some American Mall shopping and some touristy things in Ft Myers Florida where I used to live. She is taking me on a tourist ranch type tour that often has an alligator on the bus. That could be interesting!

After all that hilarity I'll be flying to Nashville Tennessee to stay with my mother and brother's family for two weeks. That will include a Thanksgiving dinner which I have not done in two decades as well as seeing the Macy's Day parade on TV that morning for the Christmas season kickoff.

I am also hoping to get to a large book shop I mentioned earlier and spend some time with my 'Lil' Brother who I haven't seen in almost 3 years.  My mother is close to 90 years old now and it will be nice to spend time with her. She is addicted to vintage films and no doubt I will see several movies from the 1940's and 50's and she will tell me about everyone who features in them as well as additional stories to go with it. She is to old movies as I am to Penguin books. We love them.

Then I head back to California again for another short week with my sister. I'm hoping we might see City Lights bookstore in San Francisco this year but we'll see what's going on. In any case I'll enjoy the warmer weather I'll have in California and Florida as we're going back into a cold snap here for the next 10 days.