Great American Short Stories: The Gift of the Magi

I think every student in the United States must read O. Henry's short story the Gift of the Magi at one time or another.  It seems to be the prime example of explaining irony to students and I must say I never forgot it. I also never revisited it again.

So as part of my October challenge (here) to discuss a short story I pulled a book off the shelves called Great American Short Stories: From Hawthorne to Hemingway. 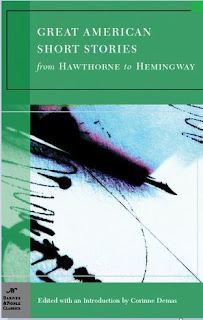 All of them are brilliant authors and I have had this book in a TBR pile for a very long time. Yesterday I pulled it off the shelf and saw the two stories listed by O. Henry.

O. Henry has been a favourite American author of mine since I was a teenager. He has very quirky stories with even quirkier, not always ironic endings. He took up writing seriously in 1898 when imprisoned for three years for embezzlement whilst working in a bank.
I have always enjoyed his writing and the substance of his stories.
If you haven't read a story by him (his real name is William Sydney Porter) I hope you find one and see what you think.

The Gift of the Magi is a story of a newly  married couple, Della and Jim Dillingham Young who are very much in love but quite poor.   It is the day before Christmas and both want very much to give a gift to their partner but can't afford it.

However the couple do have two cherished possessions. One is Della's very long hair, silky, brown and waist length and Jim has the pocket watch that both his grandfather and father passed on to him and they cherish it.

In desperation Della decides to sell her hair to attain money for a gift for Jim. She receives $20.00 for her hair and rushes into the shops happily finding a beautiful fob and chain for Jim's watch. After work Jim also rushes to the shops and finds the perfect gift for Della. 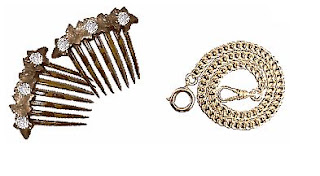 When he returns on Christmas Eve he is amazed to see Della with a very short bobbed haircut with curls she has created with a curling iron.  Della is very happy as she hands him his gift and he unwraps the beautiful watch fob and chain.  However he says to Della that he sold his watch in order to raise the funds needed to buy her a gift which is a beautiful set of tortoiseshell combs for her hair.

In the end, they embrace, full of love and simply decide to put the gifts away to enjoy when once again he has a watch and she has long hair.


"Jim had not yet seen his beautiful present. She held it out to him eagerly upon her open palm. The dull precious metal seemed to flash with a reflection of her bright and ardent spirit.
Ïsn't it a dandy, Jim? I hunted all over town to find it. You'll have to look at the time a hundred times a day now. Give me your watch.  I want to see how it looks on it."
Instead of obeying, Jim tumbled down on the couch and put his hands under the back of his head and smiled.
"Dell," said he, "let's put our Christmas presents away and keep 'em a while. They're too nice to use just at present. I sold the watch to get the  money to buy your combs. And now suppose you put the chops on. "

O. Henry wrote; "The magi, as you know, were wise men - wonderfully wise men- who brought gifts to the Babe in the manger. They invented the art of giving Christmas presents. Being wise, their gifts were no doubt wise ones, possibly bearing the privilege of exchange in case of duplication. And here I have lamely related to you the uneventful chronicle of two foolish children in a flat who most unwisely sacrificed for each other the greatest treasures of their house. But in a last word to the wise of these days let it be said that of all who give gifts these two were the wisest. Of all who give and receive gifts, such as they are wisest. Everywhere they are wisest. They are the magi. "

I enjoyed rereading this story again after so many years and was happy to rediscover some wonderful memories from the time spent at a young age hearing this story for the first time.  Ironically I wasn't ever the top student in my classes but I did enjoy much about school. I just seemed to have an overpowering social life that interfered with studies.  I look forward to rereading some of the other stories in this lovely book.
Posted by Travellin' Penguin at 17:37