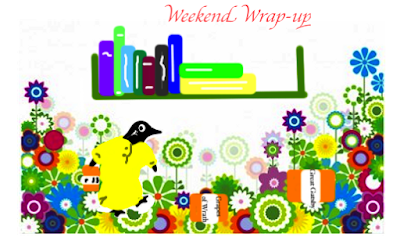 It's been a really pleasant week. Not too much on but enough so I didn't get bored.

Books:  I finished the Gilded Hour by Sara Donati.  I must say I enjoyed it thoroughly.  A library book I ordered before Christmas at the came in this week so I am more than half way through that.  It's called
The Residence: Inside the Private World of the White House by Kate Andersen Brower. 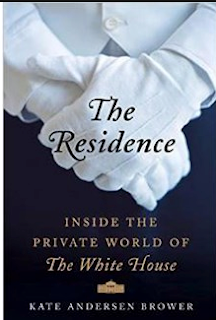 I am reading it quickly as I am finding it incredibly riveting.  I won't say much about it as I am not finished but I was surprised there are 100 people that work in the White House.  Some of them have been there as long as 40 to 55 years The loved the Bush senior family the most for their down home friendliness and lack of discrimination and the ones they disliked the most was Hilary Clinton for the temper tantrums, door slamming and unrealistic expectations she had of the staff to finish jobs within certain time limits. She said she and Bill had the most passionate and volatile relationships. Either passionate love or throwing vitriolic barbs.

I imagine a few of them won't be happy to have her back if she wins this next election this year. Then I have no idea what Donald Trump would be like in this White House environment either.  They might need extra staff to just take care of his hair though they are hair dressers on staff.

If you enjoy even the slightest bit of politics this is a very fun read.  More to come about this fun book  during the week hopefully.

Another fun thing I did was to go see the  movie Suffragette with a good friend and then have a light meal in the theatre's cafe afterwards.  The State Cinema in Hobart is a very old theatre and it has been open and closed several times during the last 100 plus years. But now it has been completely redeveloped. It has 8 smaller theatres, a rooftop theatre that is outdoors in nice weather, a beautiful independent book shop attached to it and a wonderful cafe with excellent food at reasonable prices. It is no wonder the place is packed all of the time.

Suffragette is a disturbing film of what life was like for women in London, England in 1902. It is based on a true story of the fight women endured to get the vote. I forget the exact date now but it was the 1920's before they got the vote. At the end of the film they had a list of when all countries gave the vote to women. New Zealand was first and Australia was second in 1902. The United States was quite a bit later, I believe 1920 after World War I.   I just never believed Australian politics could be in the forefront of other countries but it certainly was back then.

Although women still have a ways to go especially around equal pay issues with men they have certainly come a long way from London's 1902 when they could not even have ownership of their children.  I might mention Saudi Arabia is only now discussing the vote for women at the time this movie was made. It has now been approved and women have voted in their first election in 2015.

Today was a visit to Salamanca Market in town. It was incredibly crowded as my friend Kate and I tried to wade our way around the stalls. A cruise ship is in port so that always dumps several  thousand people into the city. We sat at our table with our coffees and picked out the American tourists. You can always spot them as their shirts generally match their pants, usually capris on the women and the men look extremely clean cut.  We could also hear the accents as their walked past us. They were having a wonderful time so we thought that was a good thing.
I was looking for Penguin books. There is a book shop in Salamanca, that is independently owned but I don't generally shop there. I find the staff to be snooty at times and I have heard the woman in the shop make fun of the people who buy certain books after they leave the store. She especially doesn't like people who come in asking for books by the Dalai Lama. I always buy my books at Fullers Book shop which is also independent and has been in business for decades. Friendly staff, helpful and I am in there so often when I walk out the door, the owner yells out, "See you tomorrow!" which makes me laugh.

However the Snooty book store has a section of second hand books.  I found a second hand Nancy Mitford Penguinn book I don't  have. The price wasn't marked.  I asked the owner how much he wanted for it. (I won't pay more than $5.00 for a Penguin in great condition as this one was.)
"Ten dollars. "  he said.  I said, "Don't be ridiculous, it's an old Penguin. I'll give you $5.00 for it." He threw his hands in the air, laughed and said "Okay".  Then he added "It's a Nancy Mitford and she's very popular". I said back to him, "Only with people who buy books regularly or collect old books or read blogs." The common person who comes in here doesn't even know who she is."  He just looked at me and handed me  my change for a $10.00 note. I chuckled under my breath as I left. 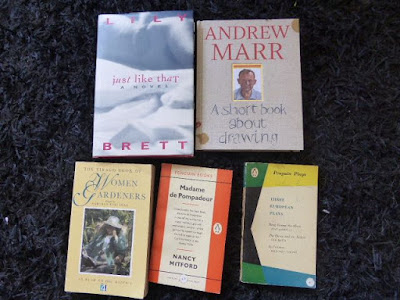 I found a few other books I liked at the market stalls once we started walking around with the cruise passengers.

They are:  A Short Story about Drawing by Andrew Marr. He chats about the pleasure he gets from drawing, how he approaches it, what he likes to draw. A very informal conversation about the joys of it all. The only thing I draw is the clothes on the Travellin Penguin and that's only because he can't run around these pages naked.

Just Like That: a novel by Lily Brett I had never seen before. I really enjoy her books. The last book I read of hers about life in New York City was delightful and I loved her book about Lola Bensky. I have a couple of others of hers on my shelf. Most of her books are auto or semi-auto biographical. She is an Australian who lives in New York city. She is also the child of parents who were in Auschwitz and she addresses the issues children of these parents have growing up. I guess you couldn't complain about how tough something was as the parents would laugh at you. There is also guilt associated with children of parents who were prisoners of war because of what they endured.

Penguin Plays No. 1289: Three European Plays. Ring Round the Moon by Jean Anouilh; The Queen and the Rebels by Ugo Betti and In Camera by Jean-Paul Sarte (first published Penguin)

The Virago Book of Women Gardeners Edited by Deborah Kellaway As Read on BBC Radio 4. I like the informal discussions within these pages. I am also on a Virago Book kick and enjoy these books by female writers.  Of course I can't read any of these until the Triple Dog Dare of TBR books finishes 1 April. 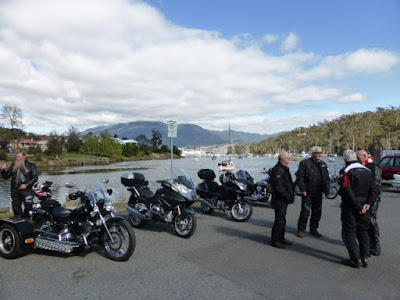 Saturday evening is also our Twilight Motorbike Ride. We meet at a place on the other side of the river Derwent at 4:30 and usually are home by 8:00 pm. before it gets dark.  I am thinking I might do this as the weather is warm today, 26 C (82 F) and little wind. I will include a photo of where we meet. It is very pretty.

Last but not least, our cats Uncle Buck and Cousin Eddie have been following me around all week.  Since we had a couple of cool weather days we sat around the house and both of us read quite a bit. So Bucky and Eddie were very happy to be near us.
I hope you find interesting things to do next week.  May the Penguin be with you........

Posted by Travellin' Penguin at 14:29