Bit of a Catch up on Books and Life

As I have been a bit flummoxed since we returned from our travels I could not focus on a book review for the life of me. Have written up Animal Farm twice and have deleted it twice.

While away, travelling in planes and staying in hotels and hostel like accommodation we read quite a few different things. I thought I'd just do a quick summary and as most reads were on the Kindle I will put up a few stock photos as Kindle photos are pretty boring. 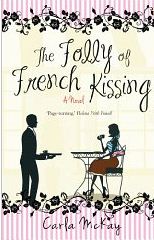 The book for the plane was The Folly of French Kissing by Carla McKay. Airplanes call for fluffy books that you don't get lost in the middle of with the countless interruptions encountered.

Judith Hay plays a school teacher in a very proper private school who unwittingly gets caught up in a scandal with a female colleague that forces her to leave. She meets a bookshop owner who falls for her in her new home but he is put off a bit by news of the scandal that she may not be as "straight" as he thinks.  The story, I thought was a bit light on but I enjoyed the characters and it moved me along as I winged it over the very large Pacific Ocean.  A good beach read.  (Thanks Elaine from Random for putting me onto it with one of your reviews. It sounded like a fun read and it was.) 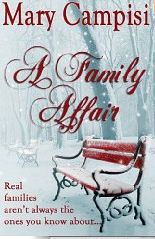 Another fun, predictable read was called A Family Affair by Mary Campsi. The story of a man who dies and leaves behind his daughter and long suffering wife.  The daughter goes to a reading of the will and discovers her devoted father had another family in another state he visited monthly as well as a child who has Down Syndrome.  Of course she must investigate this and finds herself firmly embedded in this new family's life, in love with the brother of the Down Syndrome girl who of course is not her half brother and madly besotted with her new little sister and the girl's mother, her father's long time mistress.  I enjoyed this book simply because it was a happy read with appropriate twists and turns just enough to keep me from falling asleep after a long day being a tourist.

My next book was 22 Brittania Road which came on a disc of free books I bought online from eBay. This was a bit of a dodgy buy as the seller was deregistered by eBay just before the disc arrived. I had a letter from eBay telling me the seller had been deregistered and I would probably not get my item. However, said seller had sent it out to me before his deregistration and I popped the disc into my CD drive to see what books were on it and found I had purchased an absolute multitude of books entitled the Best of 2011 not to mention many other current crime, drama, humorous writings, and classics. Oops. Copyright and all being what it is I thought I'd better not pass this on to anyone else. I was expecting a large haul of copyright free (old) books from Gutenberg.  What I got was a batch of pirated best selling books from this century. What a dilemma. What DO you do?  Keep them? Discard them immediately because of high morals? I surprised myself. I kept them.

But as it goes I will read some of them and ensure I don't pass them on to anyone else. After all I did buy in good faith and I will destroy the disc once I've had a good look at it. We'll leave it at that. Besides the book industry will not suffer as I spend half my life buying books from various sources. (That makes it feel justified.) 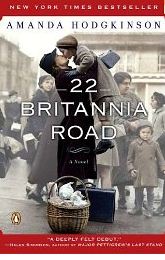 22 Brittania Road  by Amanda Hodgkinson was one of the books on this disc and I read it simply because it was on page 1 of the Kindle.  Having no idea what it was about I dived in.  I found it to be an interesting story of a Polish family, displaced during WWII, finding one another again in England where they have settled, coming to terms with the dire secrets of the past of their lives lived separately from each other for several years of the war.

I enjoyed the characters for the most part but the relationship between Aurek, the little boy and his mother got very wearing at times.  I thought the story was excellent, the characterisation was mainly quite good and overall I enjoyed it very much.  But I did want to strangle this child from time to time. I don't cope with whiny children who need to be carried everywhere when they're about six years old. 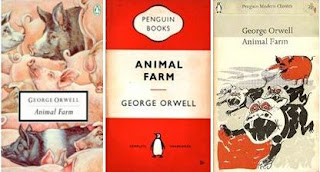 Next on the list was Animal Farm by George Orwell. After some slightly fluffy pieces of work with very predictable endings Animal Farm brought me back to reality. It is one of those books that we all had to read in high school in Michigan in the late 1960's and we even saw a theatre production, in the round at the same time.  I remember the actor who played Napolean the Pig dancing around on stage. Not caring for it one iota as a 16 year old, I thoroughly enjoyed it now as a (cough cough) year old.
So much has been written about Animal Farm I will not even try to replicate the excellent reviews of it already available.  However the characters were incredibly real, Napoloean the Pig was an awful character I really wanted to make into chops and poor old Boxer the horse had me in tears.  I  don't think this story of  the rich dominating the poor, dictatorship, communism, change, political chaos will ever date and it is as relevant today as it was when Orwell penned it.  I have several copies of this book in my Penguin collection so I hope you enjoy the covers of these vintage copies. I HAVE to get Penguins into this blog!

A book I quite enjoyed but it took me awhile to work out what was going on was Stephen King's new novella, A Face in the Crowd.  A widowed man who misses his wife dreadfully turns on the television day after day to watch his favourite baseball team play and each day he sees a person from his past sitting in the seat at the game behind the catcher.  A story about his experience with that person ensues and towards the end he attends the game and not spoiling the ending it was a big surprise for me. I must have been in holiday  mode because I did not see the end coming.  I would recommend this interesting read.  It is not one of his creepy books so if you have a fear of some of his scarier ones this one is scary in a different way. I thoroughly enjoyed it and I always find King's characters extremely well developed and very able to relate to them.

Speaking of scary reads the next read was The Snowman by Jo Nesbo. A very creepy, scary thriller by the Swedish writer Jo Nesbo.  I have repeatedly heard of this author but not read him.

This one had the hair on my arms standing on end and I was reading it in bright daylight.  Of course there is a serial killer that protagonist Detective Harry Hole must find and each murder is preceded by a snowman that almost comes to life in the vicinity of the murder.

To paraphrase:  At night the young boy looks out into the yard in the dark and the snowman is looking up at him, his beady black coal eyes staring back at him through the window. That after this child's mother has disappeared very mysteriously.

This book is not for the faint hearted but once into it I enjoyed it very much.  Harry Hole is the detective who of course is slovenly, has family members he doesn't quite get on with, always dysfunctional personally but extremely competent professionally even though everyone else on the force wants to get rid of him.  So nothing new in the line of detectives there but the story was a new one.

As we were travelling through three countries of South America and reading a lot in the guides this was about as much as I could muster in the reading department. On the long journey home I chose to watch movies as I was just too tired to read anymore.
I know I'm tired when I watch Julia Roberts and Richard Gere in Pretty Woman for the 14th time.  I love her red dress, I love it when Richard snaps the jewellery box onto her fingers and you know it's going to happen. I love it when she goes back to the shop in Rodeo Drive and says to the ladies who wouldn't wait on her the day before, "You work on commission? Big mistake. BIG!"

I also saw The Godfather for the first time ever. I had four hours left on a flight I really thought was never going to end and I saw The Godfather was 3 1/2 hours long and by then I was praying for anything to take me out of my horribly uncomfortable seat into another world. This did it. I felt like I was dodging bullets and talking with cotton in my mouth watching Marlon Brando in this old film classic.

Now I feel like I am caught up with this post and will start posting up some more serious reviews of books I have put into my TBR pile based on random selection of books owned and listed in my "book" book' of titles to read.

It is also the first weekend of spring here in Tassie and I have been madly scootering in the countryside with friends looking at the beautiful green paddocks, all the lambs racing away from us as we pass and the beautiful blooming fruit trees.  Ready for summer with not an air flight in sight. 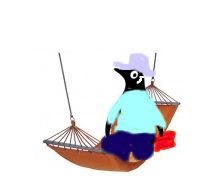 (Animal Farm counts towards A Century of Books Challenge- 1945)
Posted by Travellin' Penguin at 19:55