The Fatal Impact: An Account of the Invasion of the South Pacific 1767-1840 by Alan Moorehead
Published by Penguin Books 1968
Number 2773 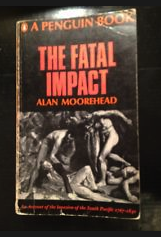 I chose this book at random using Random.org. When I saw what I had chosen I thought "Oh no, not this." But I read it anyway, after all how bad can a couple of hundred pages be?  I'm glad I read it. I really liked it.

It was the 1770's and Captain Cook was going to Tahiti for the first of several trips. It is written in such a way that I cared about him, the crew and the Tahitians. It was idyllic. I cared what they got up to.


"It is, of course, growing increasingly hard in this machine age to understand what it was like to be on a long voyage under sail in the eighteenth century; the monotonous uneventful days, the absence (in the Pacific) of any European ships at sea, the sense of leaving civilisation far away behind, perhaps to never be regained. They sailed from Plymouth in August 1878, and towards the end of the year they called at Rio de Janeiro.  That was their last contact with the known world. The days drifted away, punctuated by storms, by the catching of sharks and dolphins, by the shooting of birds, by the minutiae of the little happenings on board that make a ship a world onto itself."

It talks of the remoteness of the world at that time and how they never knew what was ahead. In referring to Tahiti he writes:

"We are dealing here with a time when the Far East was almost a closed book, when Africa was known only in outline, and, most mysterious of all, the immense Pacific offered the possibility of anything. It could be haunted by demons and monsters but it could also be the abode of the blessed. And now Cook brought back the proof that it really did exist, this golden island inhabited by happy, healthy, beautiful people whose every want was supplied by the tropical forest, and who, best of all, knew nothing of the cramping sophistries of civilisation."

The second part of the book is the later exploration and development of Australia. I would have been happy if it ended after Tahiti as I was in Tahiti. My thoughts were with the illustrator and the camp cook and the scientists then that ended quite tidily but we began again in Australia.

I would have preferred two separate books. But onwards we went into Australia. It talks about the development of the eastern seaboard, the seaboard, the fauna and flora to be discovered. It talked at great length of the interaction of the Aborigines. But it was anti-climatic. I was still in Tahiti.
It went on to tell of how the Aboriginal people were effected by the invasion of white people after Captain Cook was there.

It talked of the people who came later, the fellow explorers and the whalers. 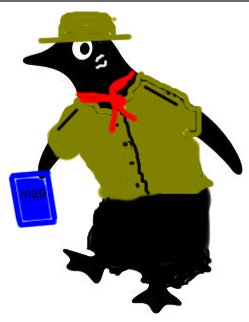 I wouldn't have chosen this book to read but having chosen it I'm glad that I did.

Although I know much of the history there remained a lot to be learned and isn't that was really good non-fiction is?

Have you read anything about Captain Cook?