The Third Policeman - What a wonderful book. Last night the ABC TV's monthly book group reviewed this wonderfully funny classic.  Having listened to the entire book (as I could not find a copy of the book itself right away)  twice in the past couple of weeks I couldn't wait to hear what they'd say about it.  One of their funnier lines was, "I laughed out loud and then had to ask What the frick is going on here?"  If you have read this book, especially for the first time it is impossible to read without asking the same question. And then digging deeper into it you see why it is such a classic.
The author Flann O'brien is Irish. Very Irish. The humour is very Irish. He lived from 1911 to 1966 when he died of cancer. The Third Policeman was his second novel.  He sent it to his publisher who had published his first one and it was rejected. Instead of sending it on to other publishers he did not cope with the rejection very well.  When asked by friends what happened to the manuscript he reportedly told them at one time he had been driving down the road with the windows open in the car when the manuscript blew out of the windows one page at a time. However he couldn't hide it from his wife. He apparently told her it just wan't ready for submission. He had more work to do on it. Sadly the book was not published until after his death.

According to several web pages I read about this author he wrote under many pseudonyms.  One of the guests on the book club show last night reported that O'Brien had articles published in various magazines under various names and then would write to the same magazines, arguing with his own articles under yet other pseudonyms so in fact he was arguing with himself and evidently took great joy when both the article and the letter were published together.   I thought it was quite funny upon hearing this tale told.

Well now onto the book.
The narrator has no name. He can't recall it as he'll explain. A murder happens immediately as one begins the book.The story then slips into a parallel universe of the absurd. The book is a satire, it has a compelling narrative even if you aren't sure what is happening the first read through it, it is laugh out loud funny and it has a very satisfying ending.   The Irishness of it has been compared to James Joyce, Spike Milligan and the humour of Tristram Shandy.
Back to the story though.  He and a mate decide to kill a man for his money as they walk along a country road. The narrator is pretty much pushed into this whole dilemma he is not overly happy with but he does bash the man to death early on.
His mate takes the cash box and disappears with it, reappearing on the scene later telling him he will reveal where it is in due time.

Once he is told where the money box is hidden (under the floorboards in the murdered man's house) he sneaks into the house to retrieve it one night. From then the story takes off into a surreal, otherworld manner and anything can happen. He continues to travel (time travelling a bit here) and meet the policemen who believe in the "Atomic Theory".  This is the belief that atoms can shift between objects, leading men to turn into bicycles which the policemen are quite obsessed with.  Everything in the world appears to be about the bicycle. Other concepts that are dipped into are physics, Catholicism, theory of relativity all in a very humorous adventure.  There is tragedy, there is suspense when he finds himself in dire straits and is about to be hung.  The views of hell are quite extraordinary.  Does this review sound a bit confusing? That is the book of the Third Policeman.

I find it is a very difficult book to explain but it is a very enjoyable book if the reader takes the time to delve into it with a very open mind and just go with what happens from page to page.  It does all fall into place the more one thinks about it.  The other interesting part of this book is there are extensive footnotes that also have their own events going on not always related to what is happening in the main story.   There are some wonderful definitions of many things in the world. For example the darkness of night is described as "the secretion of black air."  There is even some eroticism in how a female bicycle is described.  I will leave that for the reader to explore. There is so much in this story that I can only touch upon it. It is for the reader to explore, enjoy and interpret as they too travel through out this incredulous story.

From my own reading, from watching the book club's review on TV last night and from visiting a few different web pages this is a story that is a great conversation of religion, death, penance (guilt), science fiction travel, and crime and punishment. It is also a thriller in parts.  I loved this book. I didn't always understand what was happening but by the second reading things did become much clearer. It is not a long book. It really needs to be read more than once and I don't think any decisions as to whether a person likes it or not should be made after only the first reading. There is so much in it and I have no doubt that I will get a copy of my own and reread this again, if not again and again. I loved it. 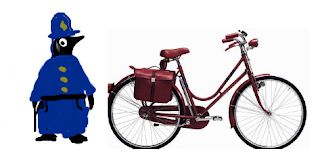 Would love to know what others thought of it if they have read  or really studied it.

To view the ABC Book Club Program you can go here.

This book counts on my Century of Books challenge for 1967 (here).
Posted by Travellin' Penguin at 22:43