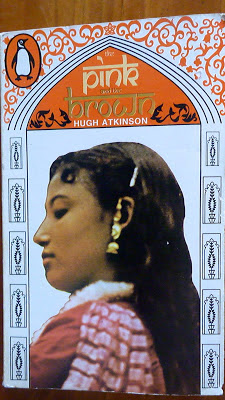 The Pink and the Brown by Hugh Atkinson
Published by Gollancz in 1957
This copy published by Penguin Books 1965  No. 2655 (Australian Penguin No. AU 16)

Counts as Century of Books Challenge for 1957


This book is part of my vintage Penguin books collection.  It is interesting because as part of the main series of the 3000 + books Allen Lane published this one was number 2655.  But lo and behold when I opened it I saw it was also numbered as an Australian Penguin published as AU 16 though no recognition of that on the spine of the book as with the other AU series.  Just goes to show the English were wanting to get those Aussie books out there but still futzing around a bit as I have written about previously.

It really does seem as though Penguin just thought they should keep the Colonials happy and stick an AU on any one of their books they felt like. Penguin Poets has one, Penguin Plays has one and on it goes so now I am really on a mission to find all of the missing Penguin Australian books.  Guess they thought they'd kill two birds with one stone and whack both a British number and an Australian number on to it. Or is that kill two emus….something about a bird in the hand is as good as two in the bush…however I am getting side tracked.

This is an interesting book to have published as an Aussie book.  Penguin didn't publish a lot in the Australian series and also interesting this book is written by an Australian novelist at the time who later left and settled in London (of course).  The entire book takes place in India so although it is an absolutely stunner of a book looks like the Australian culture still wasn't being represented very well by Allen Lane and his ilk.

Now on to the book.

The book is written as a biography although for the life of me I can't work out if it was a true record or a fictional account. I imagine it is a novel but I could be wrong.

I have searched the internet and I keep coming up with Kate Atkinson because Life after Life is so popular at the moment and then of course there is Rowan Atkinson, our dear old Mr. Bean.

Hugh Atkinson was a journalist who lived in Sydney, he wrote several books all of which are listed on Wikipedia as I can't find much other information on him yet I am quite curious about him.

The year is 1955 and it is during the time of recent independence from Britain of the Indian continent. However Goa is still under Portuguese rule and in 1955  a group of unarmed civilians called the Satyagrahis demonstrated against Portugal.  It was meant to have been a time of non violent protest and both men and women were involved. However the entire movement turned into large riots where quite a few people ended up being murdered.

This is the background of the narrative. Nehru was in office at the time and eventually in December 1961, Indian troops crossed the border into Goa and the final result was the unconditional surrender of Portuguese forces. A referendum and vote then allowed Goa to become an autonomous, federally administered territory.

Now this may sound all very dry but the book is anything but. The main protagonist is introduced to us at the beginning as he attends a cocktail party held by those people working for Eastern Oil.  The food served, the guests, all British with the exception of a few servants are established firmly in our mind and of course our expectations are met as to how the scenario plays out. British colonialism may be at an end formally but change takes awhile and the differences between the Pink and the Brown of course are very much outlined.  Peter Boyd is the only Australian amongst the Brits and the Indians and the story is told from his perspective of both cultures.

He falls in love with a young Indian woman who is very political and is intent on marching as part of the Satyagrahis demonstration. The men folk try very hard to stop her but of course women are trying to become more independent and have more of a voice in their country.  All of the British characters are in place such as they would be in any movie that takes place in India starring Maggie Smith. Racism continues to be rampant on both sides.

The story is a familiar one but the writing (in my opinion) is wonderful.  The story moves along, the issues are outlined well, the characters are well developed and there is a great deal of suspense at the end.  Read below for an example of this wonderful author's writing.


There is a time before the monsoon breaks, when the dark and passionate Indian tides squeeze the heart as palpably as a hand. The heat is intolerable, an almost physical presence, like the body-warmth of a monster, crushing, foetid, sickening. The countryside lies stunned, scorched bare, screwed to the limits of endurance. For weeks the trade winds whip in the black rain-clouds out of the Arabian Sea. Day by day they pile up, thicker, blacker, pressing lower on the city, fretting the nerves with their inner cores of turbulence. The crows, grey with dust, perch panting, their beaks agape. The beggars whine with red-rimmed eyes. The Europeans reel from their flats to their offices, from their offices to their clubs in the intense and vicious irritation which becomes the characteristic, indelible mark which India prints on every foreign brow.

As many people in Australia and other sub tropical to tropical climates know, the build up to the monsoons is always difficult and it really is as if a human presence is amongst us.

Then the rains come:


The hot, restless street life had gone to shelter, washed out by the rains. Day and night it beat down on the city, flooding the streets, stalling the traffic. The storm drains filled and choked with the filth and refuse of months, coughing back the overflow in rivers, turning low lying districts into lakes and streets into canals that only the gharries could travel through, the worn out horses over their knees and up to their bellies in the swirling muddy tides. The office workers waded in black forests of umbrellas, drenched and coughing, and indoors the mould grew in cupboards, mushroomed on shoe leather, soaked mattresses as though with perspiration.  The pavement sleepers, the refugees and the homeless had miraculously disappeared, like English flies in winter, gone into cracks, under stairways, into lavatories. Somewhere. Anywhere. 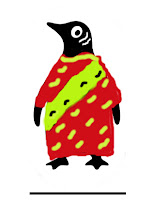 I absolutely loved this old Penguin and even though it is an Aussie Penguin that has little to do with Australia except for the writer. I forgive Allen Lane for publishing it under our briefest of lists of books.  I will be interested to get out some of my reference books on Australian Lit and see what else I can learn about this lovely Sydney writer who sadly passed away in 1994.  Evidently some films were made from his books including this one I believe and I will be looking into IMDB.com to check that out. Would love to see what the film makers did with it.

Has anyone else ever heard of this writer?   

Posted by Travellin' Penguin at 15:59