Before The Bombardment by Osbert Sitwell : Review


I am certainly reading books I normally don't read since I have started reading my old Penguin books and chatting online to other fellow book bloggers.  I chose this book randomly from my shelves using random.org which I find is great fun.
It took me awhile to get into this book and as it moves incredibly slowly I wasn't sure if much at all was happening. 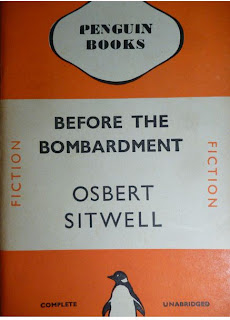 The time period of this book is just after the death of Queen Victoria and people are embracing the changes occurring during the new reign of King Edward VII.
One of the main social changes are the bridge parties where people gather together in parlours in large numbers at tables strewn around the room for a night of bridge using markers not money and gossiping hilariously into the wee hours of the morning.

Miss Bramley begins as a paid companion to Miss Fansharpe who is very strict, extremely proper with high moral standards that many cannot come close to. Although Miss Bramley does not expect to be remembered in her will, and was often treated badly,  Miss Fansharpe had always alluded to her that she would be "catered for nicely."  Once Miss Fansharpe dies Miss Bramley discovers that it wasn't to be, after all she was only a 'paid' companion and the relatives were blood linked.

After a couple of very dreary jobs that she hated she sees an advertisement for another paid companion position to Mrs. Collier-Floodgaye. They divide their time between London which is a bit more of a placid time and a very old hotel in the seaside town of Newborough.


As her employment continues, the two women develop a very close friendship, often walking arm in arm through the town in quiet conversation. Both of them have found a place in their lifetime where they are extremely happy and they look forward to the smallest activities with great pleasure. However they have raised an enormous curiosity into their relationship and their interests.


The gossip mongers of the town compile more and more stories about them and they become known as a secret that everyone wants to expose.  When one of the society ladies introduces Mrs. Collier-Floodgaye to another lady of her ilk named simply Mrs. Floodgay, who is wife of a philandering canon,  Mrs. Collier-Floodgaye is convinced that they are related. This is when everything begins to change.

Mrs. Collier-Floodgaye who is developing slight dementia is delighted to know she has a relative still living and Mrs. Floodgay's insipid daughter Cecilia is pushed to butter the 'old lady' up beyond belief.

Mrs. Collier-Floodgaye whose first name is Cecile is convinced even further the new relatives have her best interests at stake. Of course the reader can certainly work out easily what is happening here.

In the meantime Miss Bramley who is extremely fond of her new companion is disheartened and tries valiantly to keep her from her new "relatives" often bordering on the obsessive.

There is an interesting twist to the ending of this story that I did not see coming but that is not unusual. I seldom see the twists at the end unless it's a crime book.

Although I didn't really start to get into this book until the half way mark I enjoyed the story very  much. However the writer uses an incredible amount of description and it is very tedious at times.

If one does not skip over the pages of description of something quite minute the vision is then embedded quite securely in the mind and I often felt I had visited the location and could talk about it easily.


His descriptions of characters were quite humorous at times:

""The lodgings were kept by a fat, retired butler, with a red nose, and his emaciated, whining wife. She was usually on the doorstep, without a hat on, pressing her fringe down on her forehead with her hand, away from the clutches of the mischievous wind, and deploring the days that were past- days, apparently of an unimagined grandeur, spent as lady's maid in the houses of the great. Consequently she suffered from almost permanent neuralgia, which, again, aided her excruciatingly shrill lamentations. Her husband was not often in the house, but it was always to be understood that he would be back in a minute, back from some sudden and important mission."

I particularly enjoyed the description of the old biddy gossipers of Newborough as he wrote:
Between these numerous rooms of Southern aspect, however, a never failing line of communication was formed, and heroically maintained in the very teeth of the East wind, by an eager chain of clergymen, nurses, doctors, masseurs and volunteers for gossip generally. In the manner of the honey bee, these active workers sipped the gossip of each flower, which, by a constant flitting and droning from one blossom to another, they were at the same time able to fertilize, forcing it to bring forth a new crop of honey for them the following year. Thus they were partly responsible for the sweet yield of each new flower, each new scandal, by which they were to benefit, and, by passing on to the next flower, would probably cause to spring up a hundred more seeds that would again flourish into new and lusty scandals."

I was completely unfamiliar with this author and would never have read this book had random.org not chosen it for me from my shelves.  It is one of those books I could not read late at night if I was tired because it is a very tedious read however by staying with it I found it to be a very satisfactory story that I took great pleasure in and yet was glad to finish it. I will never forget the characters and the lesson within it that sometimes to be so possessive of another in the idea it "is good for them" when perhaps it is only a selfishness cropping up, will not leave me very soon. 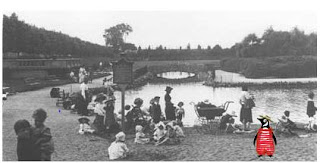 This book applies to the Century of Books challenge- 1926

Posted by Travellin' Penguin at 11:01