However James Baldwin is also another well known great of this genre. He writes not only from the heart but from the soul of the plight of the African American living in the USA with all of its contradictions.

The Fire Next Time is composed of two essays. One, quite short entitled My Dungeon Shook, Letter to My Nephew on the One Hundredth Anniversary of the Emancipation and a much longer one, Down At the Cross – Letters from a Region in My Mind.

As a white American/Australian who never spoke to a black person until I was in University as there were none in the mid western cornfields I grew up next to, I will never ever stop shaking my head at the way black Americans were treated and continue to be treated in the USA.

For continually claiming itself to be the “greatest country in the world” society and education have always failed everyone and the minority cultures in its midst moreso. I imagine it will continue to do so. It will always be the African Americans, the Mexicans, the Cubans, the Puerto Ricans , the Asians, the gays, anyone who is not a white middle class American living by the Bible and the gun. Now I also freely admit that not every white person in the USA is part of the extreme racism that reeks throughout this great country, not everyone even has guns. I will always feel America's failings as muchas its successes because it is in my blood.


Today I will only address the longer piece of Down At The Cross. It is autobiographical as James talks of being raised in a preacher’s family, a quite conservative and fearful family as everyone in Harlem where he lives has seen the atrocities or knows of someone who has lived through either extreme oppression, overt discrimination through to murder. 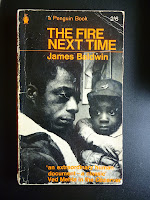 As he goes through his teenage years it was a real struggle for him to find a place to fit in where he would be safe. He discusses the many university graduates he's known who worked in menial jobs as no one would hire a black person despite their level of education and skills.

So why bother to go to school? Because the alternative is the gang culture of drugs and prostitution. He knew that was an extremely dangerous path to follow with black men not surviving much out of young adulthood. What does one do living in Harlem in the 1950’s if schooling does not achieve a desired outcome, there are no finances to escape to another location and where would one go anyway and how does a gentle soul turn into a gang member? There is pressure from every quarter of the community on his young mind.

He decided the only way to stay safe and achieve some modicum of a living was to enter the church which is what he did. He excelled as a preacher in his teenage years attracting many to his sermons, more so than his more conservative and quieter father did. He writes of intense religious experiences within the church especially through the comraderie and the music. Music is very much part of the “negro” church.
He discusses several paths of the African American and I was especially bothered by what happened to young black men who fought in World War II (written about in this book) , how they had the worst jobs in the military, scant respect and having sacrificed limb and life continued to have the worst jobs, if any when they were discharged. The hypocrisy amongst the white religious communities has always been something to be amazed by.

The following passage describes what he was thinking,

“For when I tried to assess my capabilities, I realized that I had almost none. In order to achieve the life I wanted, I had been dealt, it seemed to me, the worst possible hand. I could not become a prizefighter- many of us tried but very few succeeded. I could not sing. I could not dance. I had been well conditioned by the world in which I grew up, so I did not yet dare take the idea of becoming a writer seriously. The only other possibility seemed to involve becoming one of the sordid people on the Avenue, who were not so sordid as I then imagined but who frightened me terribly, both because I did not want to live that life and because of what they made me feel. Everything inflamed me, and that was bad enough, but I myself had also become a source of fire and temptation. I had been far too well raised, alas, “to suppose that any of the extremely explicit overtures made to me that summer, sometimes by boys and girls but also, more alarmingly, by older men and women, had anything to do with my attractiveness. On the contrary, since the Harlem idea of seduction is, to put it mildly, blunt, whatever these people saw in me merely confirmed my sense of my depravity.”

How many young adolescent white people thought like this during their 13th and 14th years.
Although he does well in the church, preaching came naturally to him and writing even more so. What happened later when he matured into an adult is he loses the reasoning of his God and eventually leaves the church. He discovers God is really white and nothing changes in his life or the lives of other black Americans as a result of aything religious.

Although it was extremely depressing to read, his truths slap the reader in the face as though he was standing in front of him/her. His writing is eloquent yet concise, his points made clearly and I enjoyed this book. I don’t think it needed to be longer because not only does the reader see what he is saying clearly, it is hard not to feel it and at times feel quite guilty for being white even if I never felt a racist feeling in my being. It is a powerful message now and would have been even more powerful and controversial at the time of publishing.

Posted by Travellin' Penguin at 16:28