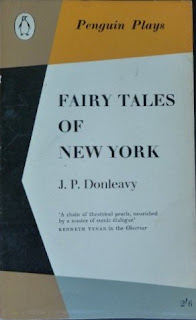 This past week one of the books I had reserved from the library came in after quite a long wait so not wanting to miss out on Michael Connelly’s latest crime novel I chose a Penguin Play by  J.P. Donleavy;  Fairy Tales of New York.

I told myself if I read something from my own shelf first I can then read the library book.   As it turned out I enjoyed both books this weekend.

I knew nothing about JP Donleavy or of his works.  The first thing I did was to have a look around the net to see what I could find out about both.  The play Fairy Tales of New York, not to be confused with his novel A Fairy Tale of New York was difficult to search because information about the novel overrides the play.

I decided to read the play before I looked for information about it. I wanted to approach this story without any conceptions garnered from google.

The play in 4 acts features the main character Cornelius Christian.

Act I immediately opens with Christian having just disembarked in New York from Ireland on a cruise ship waiting for a funeral home director to arrive as his wife, Helen died unexpectedly on board.  He is described as very well dressed, well mannered and quite grief stricken. 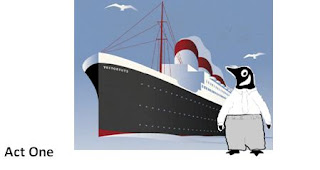 As Christian ponders his predicament he seemingly is filled with grief although he doesn’t seem that fond of Helen in his thoughts.  It is more that she has always been there and he is now alone in America.  We have no other information about him.

The important point of Act I is the relationship that develops between him and Mr. Vine the owner of the funeral home.  It begins quite well but Mr. Vine is quite insipid in the way he takes over everything about the funeral activities with Christian getting quite swept away and none the happier for it.

Act II opens with a seated Christian in the process of an interview in a spark plug sales factory.  It is all quite incongruous as the reader has Christian in their mind, as quite an intellectual, well dressed man from Act I and now he is in the factory looking for a job in a blue collar factory. 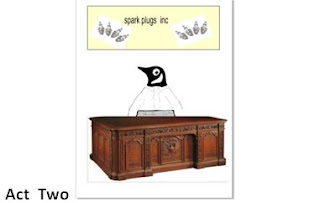 He doesn’t seem to care what he does but tells Mr How, his interviewer “He wants to make money”.  He has already had a chat with a very dismissive, Mr. Mott who owns the company.   As Mr. How begins talking about an “Ideas man” Cornelius begins idly tossing out phrases for Mr. Mott to increase sales in his business. He takes a job as an ideas man but the reader still has no other information about Cornelius Christian and it becomes a bit annoying.  We learn that he is going to live in America so he must work
.
I kept thinking, ” Do I like this play?  Where is it going?” Yet I was quite curious to continue on. By now Cornelius Christian is quite an intriguing character. 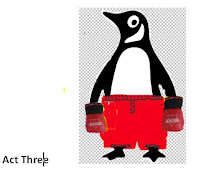 Without giving anything away, we find Christian in Act III in a boxing ring training to fight the Admiral who is a captain of a tugboat in New York harbour.  The Admiral is treated as though he captains the largest cruise ships in the world.  He is also an ex boxer and Christian is groomed to fight him once to give the Admiral some self esteem.  His trainer baits Christian telling him all of the important reasons he must let the Admiral feel good about himself in the ring.  We continue to learn a bit more about Christian and why he is in the U.S.A.

The final Act IV has Christian on a date in an exclusive country restaurant with a lovely young woman who had been his childhood sweetheart.  However they are unable to get served because he is wearing peach coloured shoes.   Again we have more of a picture of Christian’s past.

He creates embarrassing scenes as the play’s ending turns quite dramatic, unlike the earlier acts.   Christian walks out of the restaurant.  The waiters, one who is compassionate for Miss Graves but not strongly enough to speak against his boss, the head waiter begin to dismantle the table setting, including the chairs and the table itself as Miss Graves falls to the floor still in tears.  She refuses to move due to being so mortified that everyone in the restaurant stares at her.

Christian then returns dressed in an eloquent outfit, no peach shoes, chatting to another very important client and the waiters fall over themselves to set everything back up again for the meal he will share with Miss Graves.  She runs to Christian, throwing herself against him in an embrace.

As I read this play, I noticed each act presented three main personalities. There is an authoritarian figure, (the funeral director, the owner of the factory, the Admiral and the restaurant staff.)

There is also the subservient character who appeared throughout to be Cornelius Christian with a character at a middle level that intervened or contributed to the relationship between the weakness of one character and the authority of another.

The reader has no information about Christian in Act I. We know nothing about him. Each subsequent act gives us a bit more information about him.  Throughout the play, his actions change. There is a dilemma in each setting.  As life progresses for him, his actions in each episode change the focus from an evaluation of his world to an evaluation of him.  He is quite easy to like in some situations but not so much in others.  Is it him that changes because of who he is or does the situation make him appear differently?

He forces us to question the limits of his tolerance and the potential of his resistances; to decide that his tolerance, the amount of inhumanity he is able to suffer, is fairly large, his resistances temporary and absorbable.  He appears to adapt to every situation he appears in although it is not always comfortable to observe.

JP Donleavy wrote this piece during the Beatnik era of the late 1950’s New York. It was a period of time stemming from the 1940’s that included amongst other ideals, a rejection of materialism and the idealizing of exuberant, unexpurgated means of expression and being.  I can certainly see how Cornelius Christian’s character fit into this theory.
I think this short play, 94 pgs, should probably be read more than once to get everything out of it. There is much that a reader can easily gloss over and then with hindsight see how the pieces fit together.

It is not seen as being a piece of writing to equal the main book, Donleavy was known for, The Ginger Man which is also published as a vintage Penguin book (on my shelf).   I would recommend this play and would love to know what others felt about it as they read it.

Posted by Travellin' Penguin at 16:38