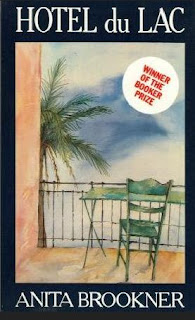 Okay, I have come to this book late. Late for the book as it was the winner of the Man Booker Prize in 1984.  And later in my life as I was much younger in 1984.
I am not a person who seeks out books that win awards. I know of people who can't wait for the awards to come out and they read them all simply because they won an award.  One hoity toity I know can bore me absolutely senseless with conversations of, "Oh yes dah-ling I read Hotel du Lac years ago. You know it won the Man Booker."  Seriously she really talks like this and she's a Tasmanian. Scary isn't it.

Anyway, I digress....I would not have liked this book had I read it when it came out in 1984.  As it is I liked it. Now.  I liked it a lot but I realise more so because I finished it.

It was on the shelf. I needed something to read for my Century of Books Challenge and as I am a slow reader/book blogger it didn't too long and it has a really appealing cover.

I see many other book bloggers whom I follow have already reviewed this book with mixed feelings and I must agree my own feelings were mixed.  Although as I have stated previously I really love books that take place in boarding houses and small hotels anywhere in the world and this one was no different.

First off I love her writing. She had some of the most beautiful passages that I reread up to three times. You will need to read this to understand.
However as other reviewers seem to concur, the story seems very dated for the time period which is quite recent to the time the book was published. We are in the 1980's. I did flip back a few times to reassure myself the time period was not in the late 1800's or early 1900's.

I thought the characters were good fun. They consisted of Edith who is the main protagonist who is a writer of books that don't really seem to set the world on fire. She has had an incident with a married man in her life named David that really sets her up for unhappiness and her friends have encouraged her to go to this hotel and sort herself out so to speak.

She befriends all of the guests. One is an elderly woman, Mrs. Pusey and her daughter Jennifer. Jennifer is extremely tied to her mother and one can easily think she's in her late teens or early 20's, a bit on the chubby side and quite doting. However we learn more about Jennifer that rounds out the imagination of the reader a bit more. I enjoyed the storyline around these two women but I did shake my head a lot at their interests. I always find it fascinating to read about people who seem to survive perfectly okay inside of a very insular bubble.

I think my favourite character was Mme de Bonneuil.  There are wonderful descriptions about her as she sits in the dining room for tea and her character and manner amused me greatly.  Although she doesn't have a large speaking role in the story she always appears to be nearby and she is quite a sad character really. I felt really happy when she actually smiled at something happening in the hotel. She has ended up in this hotel because her son's wife doesn't care for her and she has been somewhat farmed out to leave them in peace.  I thought Brookner's descriptions of her was excellent.

The character I didn't care about so much was  Monica. She is an anorexic who has no end of issues in life to deal with and is never seen without her dog Kiki who eats most of the food that Monica is served in the hotel. Although she does often gorge herself on cakes in the local cafes.

Edith slowly befriends these characters and also steps out a bit with Mr. Neville which all of the other female inhabitants find endlessly fascinating.  They have a few walks about the village and discuss all matters of relationships, past, present and it is during some of her time with him that some really good thoughts emerge. (Or so I thought).  There is a great deal of reflection upon life and relationships and how people manage or don't, and I enjoyed reading about these.

It is not a book where a great deal happens. I did wait a bit for something dramatic but though my expectations were raised a couple of times nothing really eventuated that made me grasp my throat with my hand and go, "Oh Criminy"... It just didn't happen.

It is a short pleasant read but I feel it is important to go right through it and don't drag it out as I did.  It is less than 200 pages but it did seem a bit longer than that.

I would recommend it. There are many great bits to pick out of it but don't have a great deal of anticipation for exciting adventure or revelations. It just doesn't happen. I found it to be a quiet, very comforting read on a tired day.

Applies to Century of Books Challenge 1984

If someone would like the copy of this book I am quite happy to post it out.  I have decided this year to spend time reading my own books and those I no longer need on my shelves are being released into the wild.  So let me know if you'd like this and I'll happily post it anywhere in the world as it doesn't weigh much.
Posted by Travellin' Penguin at 13:23